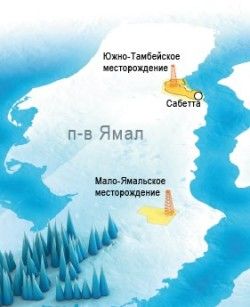 Yamal liquefied natural gas (LNG) project includes the development of the South Tambey (Tambeyskoye) gas field, located near Sabetta in the Yamal peninsula in Russia. The Russian Government has declared the project to be of national interest.

Yamal peninsula is estimated to hold the largest gas reserves in the world. The region, however, has the toughest working conditions. The land is boggy, making drilling operations a challenge. In the winter season, daylight is available only for a short period during which the majority of the operations need to be carried out. In addition, the area is very remote, with no local workforce available. The nearest potential market is also located 3,000km away.

The South Tambey field was discovered in 1974. In 2010, 2D seismic studies were carried out at the field to understand the geological properties. The field contains 72 commercially viable gas layers, of which 33 are shallow dry gas layers and 28 are deeper gas layers. The depth of these layers varies from 900m to 2,850m.

Estimated reserves of the field stand at 44 trillion cubic feet (tcf) of gas and 550 million barrels of condensate. The proven reserves stand at 1.26tcf of gas and 51.6mt of gas condensate.

The project is being developed in three phases. The first phase is expected to be operational in late 2016, the second phase will be carried out in 2013-17 and the third phase in 2014-18. An investment of $15bn to $20bn is expected to be made in the project.

Contact us to get information about current job openings on the project!

You have unsaved data. If you leave this page now your changes may be lost.