TurkStream is the project for a gas pipeline stretching across the Black Sea from Russia to Turkey and further to Turkey’s border with neighbouring countries. The first line of the gas pipeline is intended for the Turkish consumers, while the second line is designated for the Southern and South-Eastern Europe. Each line will have the throughput capacity of 15.75 billion cubic meters of gas per year. South Stream Transport B.V. is responsible for the construction of the gas pipeline’s offshore section.

The TurkStream Project is being developed in accordance with the Intergovernmental agreement between Russia and Turkey. The offshore section through the Black Sea is constructed by South Stream Transport B.V.

South Stream Transport B.V. is based in Amsterdam, The Netherlands. With a team of over 200 international experts, the Company is fully equipped to construct the deep-water pipeline in a safe manner, with due regard for the environment.

Working at South Stream Transport means being part of an international team to help realize the largest offshore gas pipeline ever build.

Bringing together over 200 people all over the world, South Stream Transport B.V. is a truly international company. You will work with some of the world’s best engineers and experts to realize this Project in a safe and responsible way.

We believe that such an ambitious Project requires a work environment in which everyone feels home. Our headquarters in the Netherlands is conveniently located just 15 min from the city centre of Amsterdam and a 10-minute train ride to Schiphol International airport.

For international applicants, we offer assistance with your relocation to help make you feel right at home. Our compensation packages include an attractive salary package, a pension and bonus system and an excellent work environment. 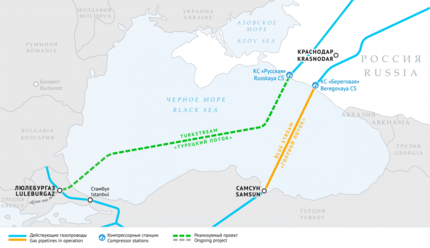 The project complies with all environmental safety standards. The construction and operation technologies for the subsea pipeline foresee minimal impact on the environment, seabed geology, water quality and the habitat for marine fauna, mammals and sea birds as well as fishery.

On December 1, 2014, during the state visit of the Russian President Vladimir Putin to Ankara, Gazprom and Turkish company Botaş Petroleum Pipeline Corporation signed the Memorandum of Understanding on the construction of an offshore gas pipeline from Russia to Turkey across the Black Sea.

On January 27, 2015, Alexey Miller, Chairman of the Gazprom Management Committee and Taner Yildiz, Minister of Energy and Natural Resources of the Turkish Republic discussed the preliminary results of Feasibility study for the new pipeline and decided on its route.

On February 7, 2015, Alexey Miller and Taner Yildiz defined the key reference points of the route and technical solutions for the gas pipeline in Turkey.

On June 22, 2015, Turkey issued a permit on engineering surveys for the offshore section of TurkStream. The document stipulates that investigations will be carried out within the exclusive economic zone and territorial waters of Turkey regarding the first offshore string of the gas pipeline.

In September 2016, Gazprom received a series of permits for the TurkStream project from the authorities of the Turkish Republic including the first construction permit for the offshore section and the survey permit for the two strings of the offshore gas pipeline in Turkey’s exclusive economic zone and territorial waters.

On October 10, 2016, The Agreement on the TurkStream project between the Government of the Russian Federation and the Government of the Turkish Republic was signed in Istanbul. This document provides for the construction of two strings of the gas pipeline from Russia to Turkey across the Black Sea, as well as an onshore string for gas transit to Turkey’s border with neighboring countries.

On December 8, 2016, South Stream Transport B.V. (a wholly-owned subsidiary of Gazprom) and Allseas Group S.A. signed the contract to build the first string of the TurkStream gas pipeline’s offshore section with an option for laying the second string.

On February 20, 2017 South Stream Transport B.V. and Allseas Group signed a contract to build the second string of the TurkStream gas pipeline’s offshore section. The document was signed as part of the option included in the construction contract for the pipeline’s first string, which had been inked in 2016.

On July 22, 2018, in Turkey nearshore works started for the TurkStream Gas Pipeline. The works involve constructing seabed trenches for around 2.4 kilometers length from the shoreline into the sea in order to bury the pipes for protection against wave action and avoidance of fishing interaction.

On 19 November, 2018, the President of Russia Vladimir Putin and the President of Turkey Recep Tayyip Erdogan took part in the ceremonial completion of TurkStream gas pipeline’s offshore section.

Contact us to get information about current job openings on the project!

You have unsaved data. If you leave this page now your changes may be lost.